SUMMARY
The remains of a mid-nineteenth century small farmstead were found underneath an urban neighborhood by archaeologists in advance of the extension of the Bowling Green by-pass from KY 185. Examination of the intact architectural remains found at the site indicates that the area changed greatly overtime, as the town of Bowling Green expanded. The property was originally an seven-acre parcel located just outside of the town’s main business district, where prominent doctor John M. Briggs built his residence and some of the 14 people he enslaved worked a small farmstead from the 1820s to 1840s. The remains of several small domestic buildings investigated at the site were likely slave houses. These remains indicate that Briggs organized his buildings much like larger farmsteads located further from town. Briggs sold off most of his land except for a lot that contained his house. Subsequent owners farmed the property lived in and rented out some of the former slave houses. Eventually an urban neighborhood was built on top of the remnants of the farmstead. The archaeological remains at the Center Street site tell the story of urban development in Bowling Green.

The rear yards of shotgun houses at the Center Street Site. 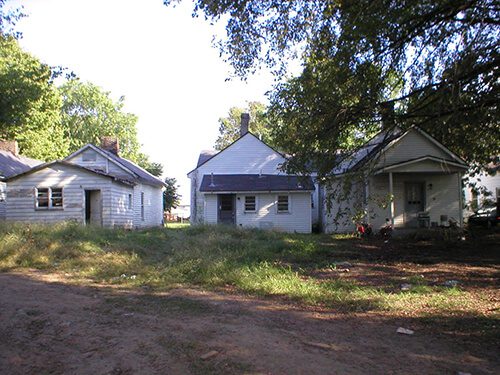 The remains of a pit cellar for a slave house. A handmade brick with a “frog” from the remains of an early nineteenth century house. FINDINGS
The archaeological remains found at the site included foundations, pit cellars, post holes, trash pits, and walkways. These remains and many of the artifacts recovered from the site, including window glass, nails, and bricks, were associated with the various buildings that occupied the property overtime. Some of the brick was handmade and featured a depression in one side, known as a “frog” to help the mortar bond to them. These bricks were part of foundation which had mostly been removed when the associated 1830s slave house was demolished, leaving just a few bricks and a stain where it had been. Other artifacts from this building included ceramic dish and glass bottle fragments, buttons, and animal bones. A small pit cellar associated with another slave house also was found at the site. These cellars were sub-floor pits used for storage which were common to small nineteenth-century houses and kitchens. The privies and trash pits, as well as most of the artifacts, were associated with poor working class residents who lived at the site after the 1880s. Some of these were associated with an undertaker who operated a funeral home at the site during the early 1900s, such as an embalming fluid bottle and a casket shaped paper weight.

Artifacts recovered from around the foundation remains of a house. 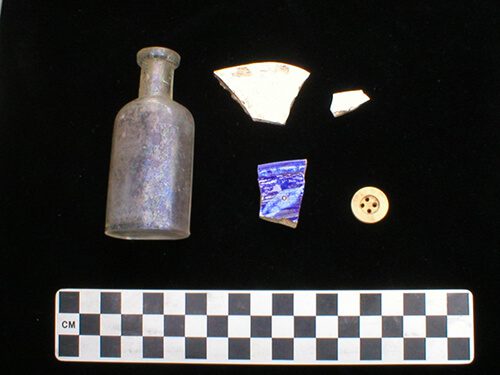 The remains of a foundation to an early nineteenth century house in the backyard of a shotgun house. 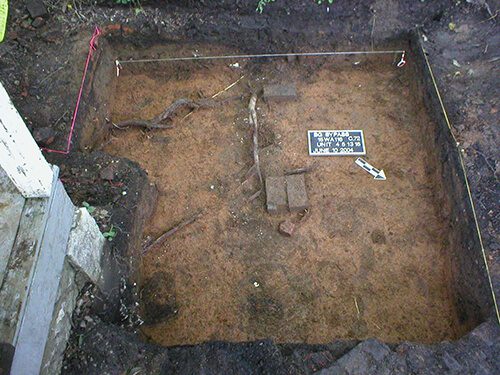 WHAT’S COOL? THE ARCHAEOLOGY OF DEVELOPMENT
The remains of foundations, pit cellars, and artifacts associated with slave houses and outbuildings found in the yards of an urban neighborhood indicate that in the 1820s and 1830s the property was a small farmstead. By the 1ate 1840s the property was divided into smaller urban farmsteads, as the slave houses were renovated and became home to upwardly mobile farmers and tenants. In the late 1850s, the property was divided into smaller lots too small to farm. Existing houses were renovated or replaced by new houses for working class property owners. Eventually by the 1880s the buildings were demolished and the lots were subdivided into smaller lots upon which small shotgun houses and cottages were built to house poor African-American working class renters. The archaeology at the Center Street site provides a glimpse at the process of urban development that has occurred in Bowling Green since the 1820s.