SUMMARY
The Evans site was excavated in advance of the realignment of U.S. Highway 11 in Montgomery County. As a result of the research conducted at this site, archaeologists concluded that it was a place where Middle Woodland groups periodically gathered to prepare their dead for interment in a nearby mound. The specific mortuary rituals performed at the Evans site would have been dependent on an individual’s age, sex, and status. These rituals would have been undertaken to ensure a loved one’s safe passage to the afterlife. 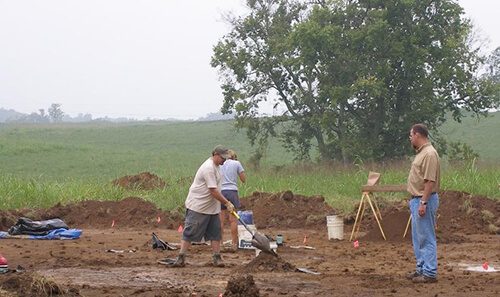 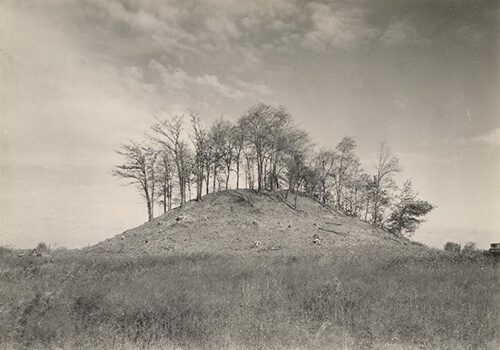 FINDINGS
Several lines of evidence lead archaeologists to believe that ritual activities had taken place at the Evans site. First, was the discovery of two large pits along the eastern edge of the site. These pits were lined with dark organic soils and filled with yellow clay that had been processed to remove impurities. Secondly, along the western edge of the site, they found pits that contained debris from the making of mica crescents for interment with the dead. Native cultigens (squash, maygrass, chenopod, and sunflower) recovered from these pits suggested that the manufacturing of this objects was associated with ritual feasting. Thirdly, towards the center of the site, they found evidence of burning, concentrations of fire cracked rocks, yellow clay, and burned bones in a large shallow basin. They interpreted this basin as representing the locus of activities associated with the cremation of the dead prior to them being interred in a nearby mound.

Planview Showing Pits and Posts at the Evans Site. 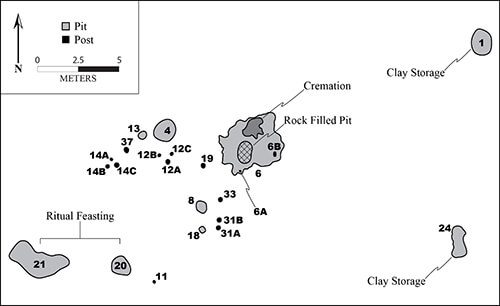 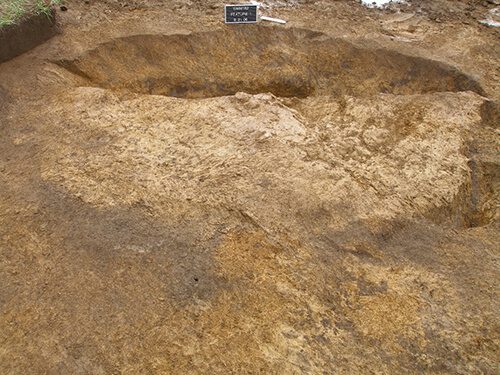 WHAT’S COOL? THE USE OF CLAY IN FUNERAL RITUALS
The use of yellow clay appears to have been very important aspect of Middle Woodland rituals. It was used to build platforms on which the dead were placed, to permanently seal individual graves, to construct log tombs, to create basins where people were cremated, and to cap burial mounds. At the Evans, not only did archaeologists find evidence of clay being stored for later use, but within the central basin they found an area of alternating layers of clay and ash. The recovery of only a small amount of cremated remains from the ash deposits, led archaeologists to concluded that after an individual had been cremated they were interred elsewhere, perhaps in a nearby mound.