SUMMARY
At the Howard site in Madison County, Kentucky, KAS archaeologists discovered the remains of a large prehistoric Native American village dating to the Late Fort Ancient period (A.D. 1400-1750). Located on a low ridge overlooking a stream now known as Hartís Fork, this village consisted of several clusters of houses, each of which was probably occupied by a group of closely related families. Unlike their Woodland (1000 B.C. ñ A.D. 1000) predecessors who relied on wild plants and animals for food, Fort Ancient people were primarily farmers. This allowed them to stay in one place all year, although they still collected some wild plants and hunted wild animals. For hunting, they produced small triangular arrowheads out of chert/flint. For more domestic activities such as cooking and storing food, they produced pottery using clay taken from nearby riverbeds, to which they added shell. They often decorated jar necks with geometric designs.

Triangular Endscraper: These types of tools were used to scrape hides, and process plant remains. They are very common on post-A.D. 1400 Fort Ancient villages. 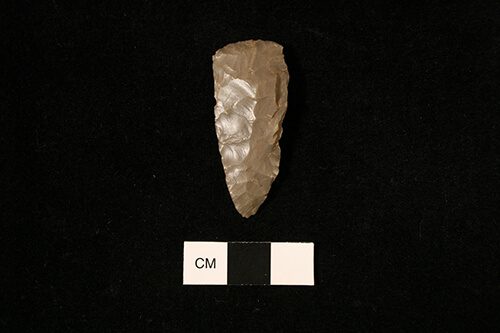 While the occupants of the Howard site produced most of the items they used on a daily basis such as arrowheads, pottery and clothing, they also traded with other Native American groups for items that were not available locally, such as shell, glass and copper beads. Such rare items would have been regarded as exotic and valuable.

By the late 1600s and early 1700s, Native American groups located further to the east and south had already come into contact with Europeans and had acquired European goods. Through trade and exchange with their neighbors, the people at the Howard site came into possession of European goods, including beads made of glass and copper. The presence of these European goods at the Howard site indicates that the village was abandoned just before the first Europeans arrived in Kentucky. The Howard site thus gives us a rare glimpse into Native American life as it was immediately prior to European settlement of Kentucky.

As described above, Fort Ancient peoples were primarily farmers, but they supplemented their diet of corn and beans with meat taken from wild animals, and with a variety of wild fruits, nuts and berries that they collected. For hunting they produced arrowheads made of chert/flint. They tended to be small, thin and triangular. Archaeologists call these types of arrowheads Fine Triangular Points.

Also found were stone tools known as triangular endscrapers. These were used primarily for scraping animal hides. At the Howard site, scrapers outnumbered arrowheads. This suggests that the processing of animal hides was an important activity at the Howard site. Animal furs may have been used as trade items as well as for clothing and bedding. 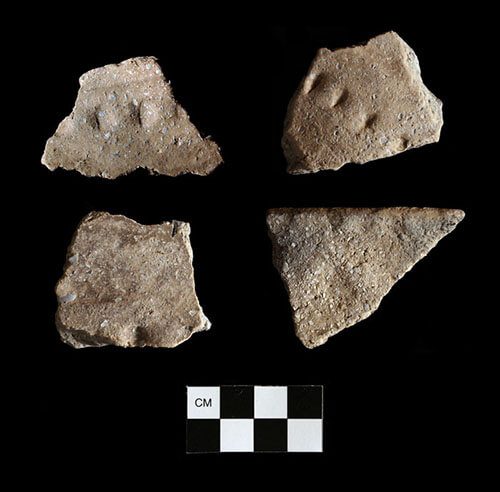 Ceramic Dog Effigy (Note head and feet were broken before it was discard). 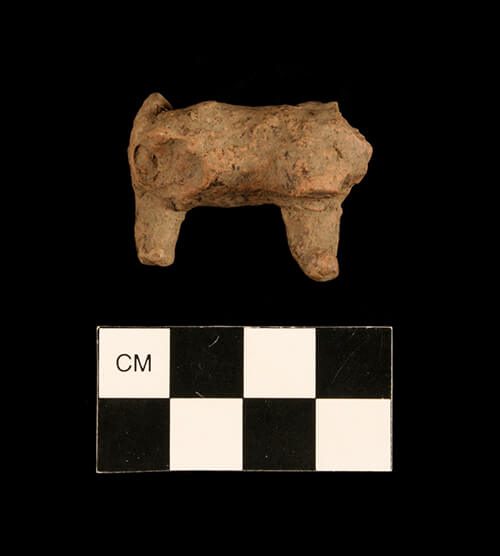 Pottery found at the Howard site included a variety of jars. Many of were plain, but the exterior surfaces of some had been impressed with a cords that had been wrapped around a paddle. They had drawn rectangular designs with wide sticks that made a shallow impression and often filled areas with punctuations. Some of the more unusual pottery items found at the Howard site include ceramic disks, clay beads, a ceramic dog effigy, a human head effigy, a pipe stem fragment, and a spoon.

The clay beads were probably associated with pendants and necklaces, while the pipe would have been used to smoke tobacco.

Pottery found at the Howard site included a variety of jars. Many of were plain, but the exterior surfaces of some had been impressed with a cords that had been wrapped around a paddle. They had drawn rectangular designs with wide sticks that made a shallow impression and often filled areas with punctuations. Some of the more unusual pottery items found at the Howard site include ceramic disks, clay beads, a ceramic dog effigy, a human head effigy, a pipe stem fragment, and a spoon.

The clay beads were probably associated with pendants and necklaces, while the pipe would have been used to smoke tobacco.

The recovery of a marginella (sea snail) shell bead and pieces of mica (a shiny mineral), reflect the Howard siteís late Fort Ancient residents participation in exchange networks with groups living to the south. The marginella bead implies that the inhabitants at this Fort Ancient site were part of a trade network that may have reached to the southeastern coast of the United States or to the coastal areas of the Gulf of Mexico. The closest source of mica is the Blue Ridge Mountains of North Carolina, approximately 322 km southeast of Howard. The presence of mica at the Howard site, suggests a regional exchange of this highly-regarded mineral.

A glass bead and a copper bead recovered from the Howard site both represent evidence of trade between Europeans and Native Americans. The glass bead recovered is a wire wound bead, formed by winding a rod or strand of glass around a rotating piece of metal. The blue color was achieved by adding cobalt to the glass mixture. The copper bead was tubular and had been manufactured from a small rectangular sheet of copper.

A blue glass bead, a small clay bead, and a tubular copper bead. 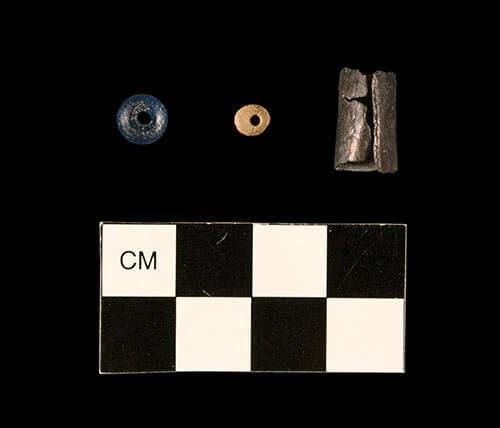 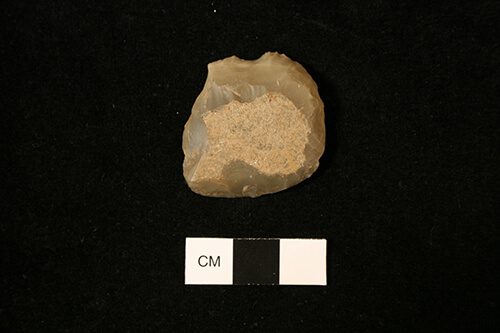 The Howard site displays the typical Fort Ancient plant use pattern. People living at this village ate corn and beans, supplemented with nuts and other wild plants. A few aspects of their subsistence patterns are suggestive of local variation in plant use. For instance, an unusually high nutshell density suggests that nuts were a more important component of the diet at Howard than at other Fort Ancient sites.

Hunting activities focused on white-tailed deer, black bear, turkey, and to a lesser extent, small mammals. The range of habitats reflected by animal bone from the Howard site was somewhat greater than has been documented at other Fort Ancient villages, suggesting that the siteís inhabitants utilized a more diverse environment than residents of other Fort Ancient communities.

One complete gunflint and another gunflint fragment were recovered from the Howard site. The complete gunflint was manufactured from locally available chert. It was produced by removing an individual flake (spall) from a nodule of chert. The flake was subsequently modified to a more rectangular form. Because of the technique used in its manufacture, this specimen has been categorized as a spall gunflint.

Native American manufacture of gunflints began with the introduction of firearms into a given region. Locally available lithic raw materials were used to manufacture gunflints until a reliable source of European gunflints was available. The presence of gunflints at Howard raises a number of interesting questions? How did the people at the Howard site acquire guns? Through long distance exchange or direct interaction? What did the Howard site residents exchange for such valuable items? And finally, what did they use the guns for?