SUMMARY
Located on the State Mound in Frankfort, the Military Monument was commissioned by the Kentucky State Legislature in 1848 to honor Kentucky veterans of all wars. The first soldiers to be buried on the mound lost their lives during the Battle of Buena Vista in the war against Mexico in 1847. Veterans of this conflict were further memorialized in Theodore O’Hara’s poem Bivouac of the Dead.

During the 1980s, brick and concrete walkways were mistakenly laid over the graves of five veterans. When this information was brought to the attention of Historic Properties, the agency worked with other state agencies to relocate the five honored veterans: Henry Edwards, Yves J. Thoreau, W.C. Green, Ed F. Hogg and C.W. Gilmore.

The relocation of these veterans offered a unique opportunity for forensic anthropologists and archaeologists to study 19th century military burial practices. 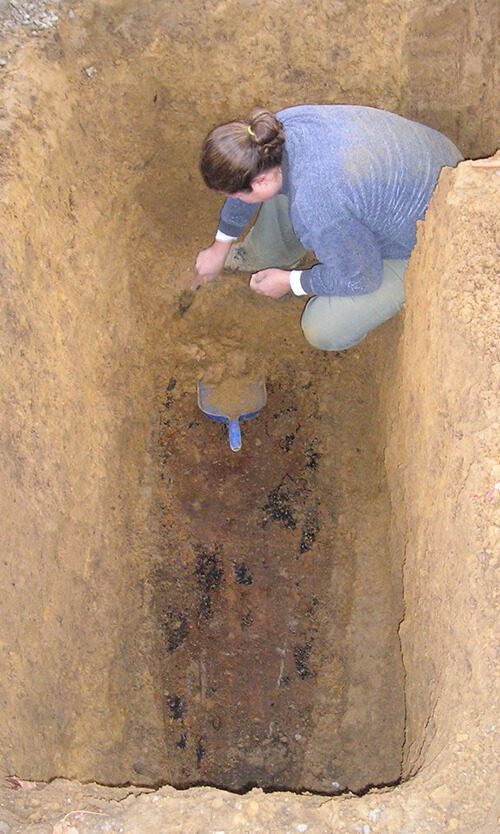 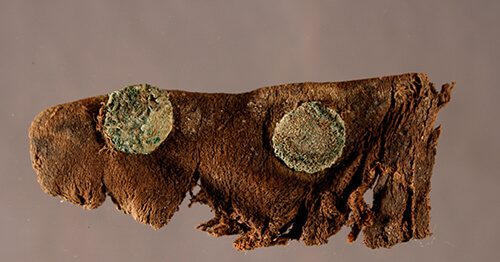 FINDINGS
Three of the five individuals who were examined died during the Battle of Buean Vista (Edwards and Thoreau) or during the occupation (Green ). Hogg survived the Mexico campaign, but died in the Civil War. Gilmore lived into his sixties and died of natural causes.

Those that died in Mexico were brought back to Kentucky in some of the earliest cast iron coffins used in Kentucky. Green’s body had been packed in wood charcoal for the trip from Mexico to Frankfort. All of the coffins had viewing plates and Gilmore’s association with the Mason’s was reflected in his coffin hardware.

Changes in the manufacture of military uniforms was documented with earlier uniforms being hand made and later uniforms being machine made and exhibiting greater standardization of buttons. Gilmore’s association with the Mason’s was reflected in his coffin hardware, and his relative high social and economic status was reflected in the quality of the clothing he was interred in and the recovery of a gold-gilded button.

Analysis of the human skeletal remains indicated that several of the soldiers had led hard lives that involved a great deal of manual labor. Some were found to have suffered nutritional stress during the course of their lives and they may have joined the military to better their lives.

MORE ABOUT THE MEN Henry Edwards (ca. 1826-1847) was killed at the Battle of Buena Vista in 1847. His remains were found six feet beneath the ground surface in a cast iron coffin. Cast iron coffins were first patented in the 1840s by Almond J. Fisk. Metal caskets were ideal for transporting the dead over long distances as they were sturdy, retained odor and preserved the body. In fact, some bodies were so well preserved that when the caskets were opened hundreds of years later, the bodies looked as they did the day the casket was sealed. 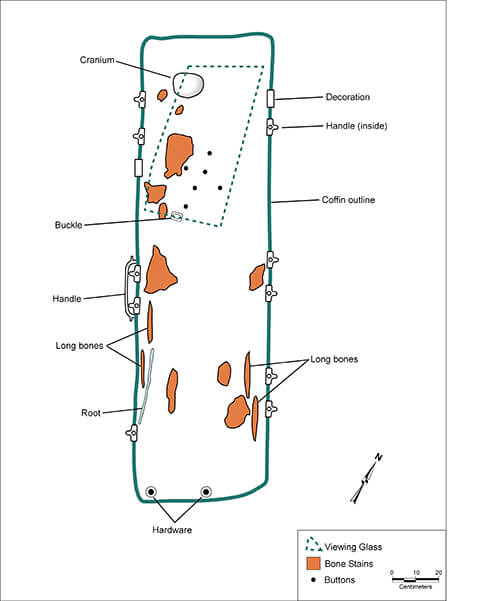 C.W. Gilmore (ca. 1825-1880) survived the Battle of Buena Vista and later served as both a State Representative and Senator from Pulaski County. He died and was buried with his comrades on the State Mound in 1880. His burial showed a distinct change in style compared to the burials of the 1850s and 1860s. Unlike the other men, who died out of state and were buried in cast iron caskets for long distance travel, Gilmore died in Frankfort. He was the only veteran found to be buried in a four-sided wooden casket that featured Master Mason symbols. 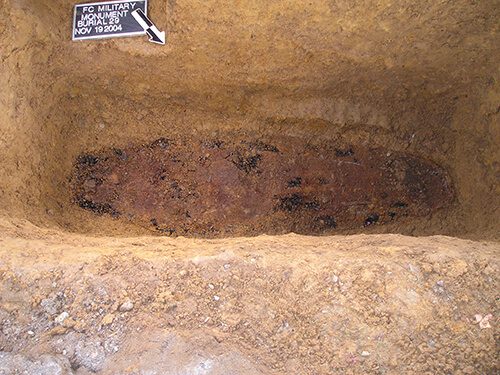 W.C. Green (ca. 1825-1847) survived the Battle of Buena Vista but was assassinated shortly after the conflict. Green’s burial was unique in that his body was shipped back to Kentucky in a casket filled with charcoal. The charcoal may have been used to absorb odor and fluids from the decomposing body, which demonstrates the problems associated with transporting bodies over long distances in the mid-19th century. 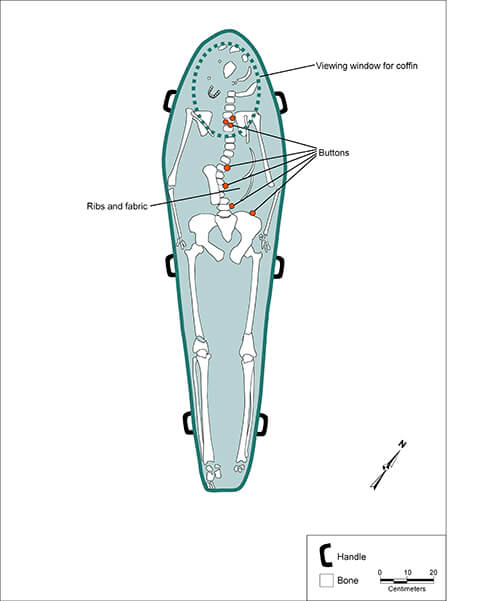 Lieutenant Ed F. Hogg (ca. 1839-1863) was a veteran of the Civil War and died of typhoid fever in 1863, near Vicksburg, Mississippi. Hogg’s iron casket was a different style from the other men and featured eight trapezoid-shaped ring bail handles. Caskets similar to Hogg’s were featured in a newspaper advertisement in 1856 for Fisk’s Metallic Coffins by Raymond & Co. Later versions of these coffins were popular during the Civil War, as they proved effective for transporting bodies over long distances from the battlefields to their final resting places. 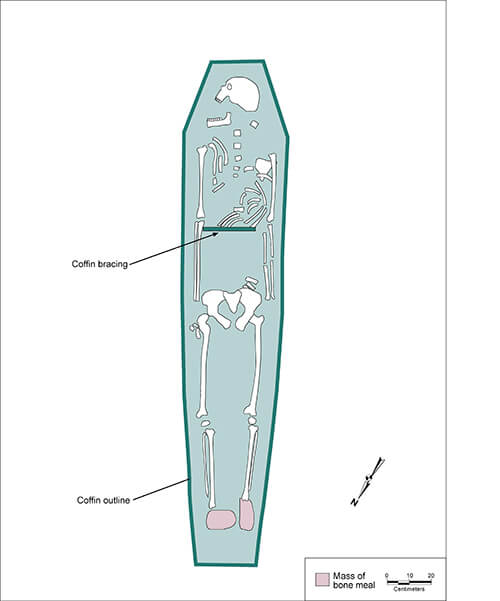 Yves J. Thoreau (?-1847) was killed at the Battle of Buena Vista in 1847. Archival sources indicated Thoreau died in his early twenties. Researchers were surprised to discover Thoreau’s bones more closely resembled those of a juvenile. The short length of the leg bones leads or led researchers to speculate that he may have lied about his age to meet enlistment requirements. His burial was very similar to that of Henry Edwards, evidence that the men died and were interred at the same time.