SUMMARY
Portland Wharf Park preserves the remains of the original town of Portland once a thriving and bustling nineteenth century river town. The park encompasses 55 acres along the banks of the Ohio River, just below the Falls and the entrance to the Portland Canal. It is primarily a forested environment with dense trees and undergrowth interrupted by symmetrical swaths of mowed grass and an open meadow. The site is bound by a railroad bridge on the east, the Ohio River on the north, a golf course on the west, and an earthen levee and elevated interstate highway on the south. Portland Wharf Park is maintained by Louisville Metro Parks.

The Portland Wharf Site encompasses the entire Portland Wharf Park. The site contains the remains of the oldest part of the town of Portland and its wharf, consisting of six city blocks. The archaeological remains of the town, including streets, sidewalks, building foundations, privies, cisterns, and thousands of artifacts dating from the early 1800s to the early 1900s are preserved in several areas of the site. 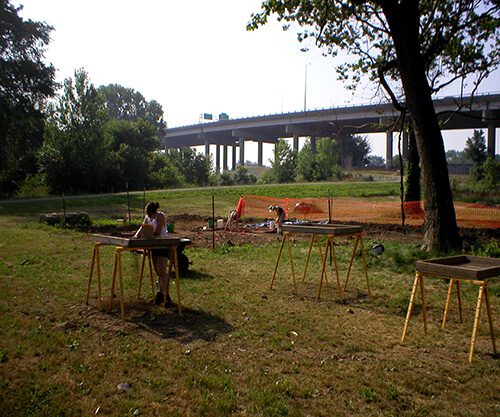