Portland was founded in 1811 at the base of the Falls of the Ohio River by Cincinnati businessman William Lytle. The town and its wharf were well situated to benefit from booming steamboat trade and the lucrative portage industry that developed around the falls. By the 1840s, Portland was a thriving port with many residences and stores to accommodate dozens of steamboats that arrived daily. The Portland wharf was the center of activity. The success of Portland instigated a long and contentious relationship with its neighbor Louisville at the head of the Falls. Louisville annexed Portland for a brief period in the 1840s only to have the town become independent.

Sketch of Portland Wharf near its peak of steamboat activity in 1853, courtesy Special Collections, Ekstrom Library, University of Louisville. 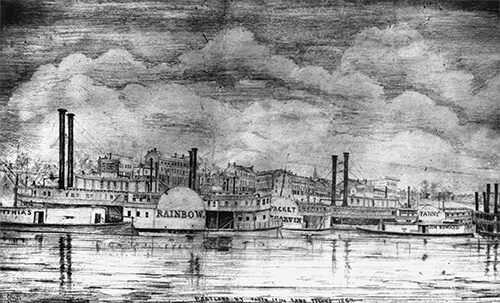 In the 1850s, Portland boasted a large five-story hotel and several industries. Louisville successfully annexed Portland in 1856. When the Portland Canal was improved in 1870, the portage industry was no more and the Portland wharf began a decline that was most evident after a series of major floods in the 1880s and 1890s. After the 1937 flood, Portland’s birthplace and main economic hub in the nineteenth century was gone buried beneath feet of silt in front of the floodwall that now protects Portland the neighborhood.