The Portland Wharf and portions of the Portland Neighborhood has been the subject of several archaeological investigations in the past. In 1982 and 1983 the University of Louisville conducted a surface reconnaissance and test excavations at the Portland Wharf. Four backhoe trenches were excavated in the wharf area primarily on a lot owned in the nineteenth century by Paul Villiers, an upper-class resident of the town. Hewn cedar log floor-joists of the cellar floor was found intact, as were many wine bottles. Also, a commercial lot was observed archaeologically at the St. Charles Hotel where the glazed tiles known to have been on the floors of the public rooms were in evidence along with ceramic dishes. Foundations and other architectural features with a wide range of artifacts dating to the nineteenth to the mid-twentieth century were found during the excavations. Also documented during the project were stone curbing and pavement associated with streets and walkways. Large remnants of the stone paved wharf and iron mooring rings were visible along the river’s edge at the time of the project.

Archaeologists Lori Stahlgren and Ann Moore exposed a brick sidewalk and foundation of a shotgun house at Lot 6,courtery KAS, 2005. 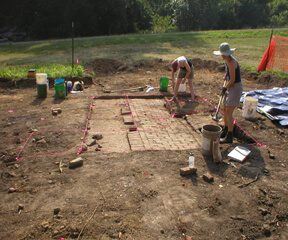 In 2002, Metro Parks and the Portland community asked the Kentucky Archaeological Survey to revisit the site and examine more of the Portland Wharf for its archaeological potential. Over 60 backhoe trenches were excavated over the entire 55-acre property. Based on the results of the survey it was determined that construction of the floodwall in 1947 disturbed portions of the site, as soil was removed to build the floodwall. However, much of the site contains intact archaeological deposits associated with the wharf, residences, businesses, streets, and sidewalks that were part of Portland during the nineteenth century. One particular city block between 33rd and 34th Street has the most archaeological potential and is the location of Lot 56, which has the remains of residences dating back to the early 1800s.