SUMMARY
The Terrill Cemetery is a nineteenth century, family cemetery located on a ridgetop to the south of Richmond in Madison County, Kentucky. In 2007, KAS archaeologists conducted investigations at the cemetery in preparation for the expansion of the Richmond industrial park. Upon clearing the trees and other vegetation, four formal headstones and five fieldstones were identified and mapped. A geophysical survey using ground penetrating radar, however, identified an additional seven unmarked graves. Ultimately, 16 grave shafts containing 18 individuals were found (two grave shafts contained multiple individuals).

Historic research together with an analysis of the artifacts found with the burials, indicated that these individuals most likely died sometime 1830 and 1876. Eight individuals were adults and 10 were infants and children 12 years and younger.

The high percentage (67 percent) of infants and children reflects high nineteenth-century mortality rates, and can be attributed to poor nutrition, poor sanitation, a lack of medical knowledge concerning common diseases, and a lack of antibiotics.

Map of the Terrrill Cemetery. Note that most of the graves are oriented east-west, but that three are oriented northwest-southeast, a burial pattern that has been documented at other rural Kentucky cemeteries for African-Americans. 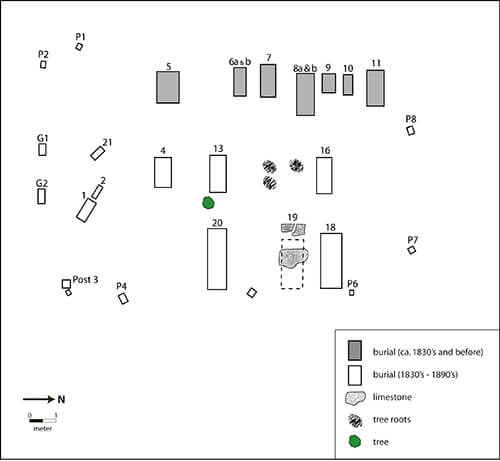 RESEARCH
Examination of the Terrill Cemetery has contributed to the growing body of data on nineteenth-century mortuary practices in Kentucky. In particular, this study has contributed to our understanding of the organization and growth of nineteenth-century family cemeteries, particularly changes in coffin and casket manufacture. It has also highlighted changes in mortuary practices that reflect the Terrill family’s participation in the nineteenth century “Beautification of Death” movement (see below).

Though Burial 20 did not have a grave marker, the date range of artifacts found with this adult male, suggested it was probably the grave of William Towles Terrill, Jr. (1804-1876).

William was a State Representative from Madison County in 1850. Later in his life, he appears to have settled down to look after his farm which by 1876, the year of his death, included 325 acres of land. He was buried in the family cemetery in an elaborate coffin with an oval glass viewing plate and six decorative metal handles fashioned to resemble hands holding metal bars. The expensive coffin fittings testify to William’s high social and economic status. 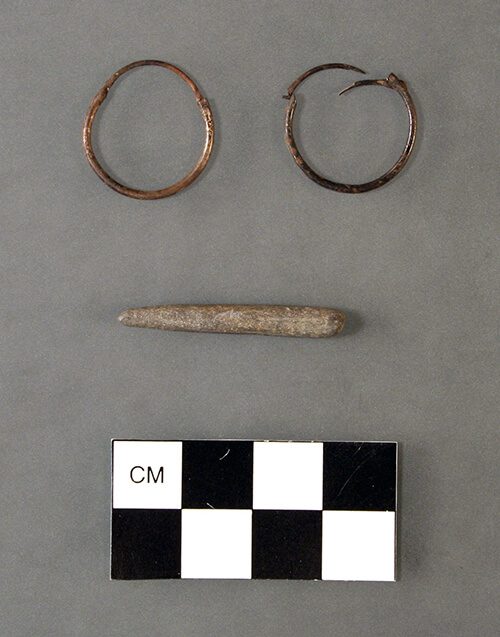 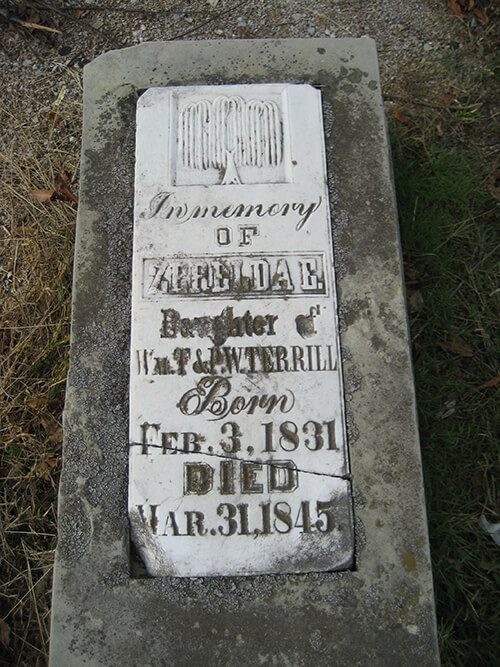 Zerelda E. Terrill, daughter of William Towles Terrill, Jr. had a short life, dying at the age of 14 on March 31, 1845. She was buried with a pair of gold plated hoop earrings and a slate pencil. The earrings were found near her head and were likely worn at the time of burial. The pencil may have been placed in the coffin when she was buried or simply left in a pocket of her clothing. The pencil may indicate that Zerelda was attending school, or that she was being educated at home.

Zerelda’s grave was marked by a headstone bearing a weeping willow motif at the top. The weeping willow suggests grief and sorrow, and can suggest immortality. In Christian belief, this motif is associated with the gospel of Christ, which says that the tree will flourish and remain whole no matter how many branches are cut off. This motif is one of the most popular gravestone decorations of the mid-eighteenth century to the early nineteenth century. 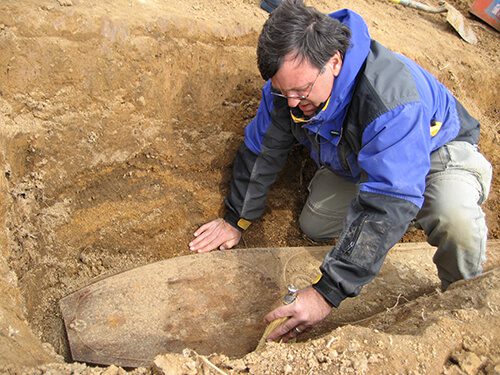 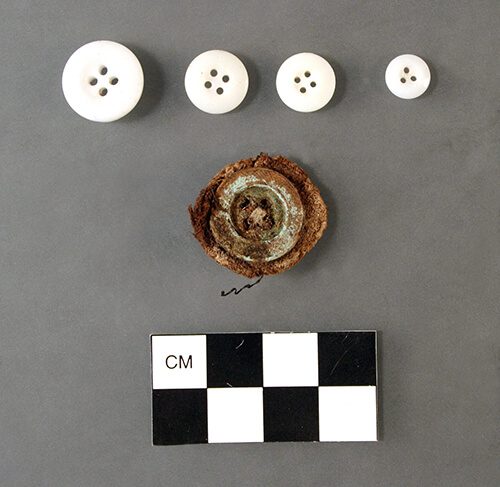 John C. Terrill and his brother Robert both fought for the Confederacy during the Civil War. John C. Terrill was mortally wounded during the war and was buried in the family cemetery in a torpedo-shaped, cast-iron coffin decorated with floral designs. Cast-iron coffins such as this were used during the Civil War to enable the transport of remains over long distances. This ensured that the deceased could be buried at their homes. The elaborate coffin suggests that this individual was of high economic status. An analysis of personal artifacts was not carried out for this individual because the coffin remained sealed.

Almost all of the burials in the Terrill Cemetery were located in one of three rows, with their heads oriented toward the west. The exceptions were Burials 1 (young adolescent), 2 (infant/child), and 21 (infant). Instead, these individuals were buried in the southernmost portion of the cemetery. In addition to their spatial segregation, they were oriented differently: their heads pointed to the northwest. The spatial separation could indicate that they were not family members. They may have been the children of household employees or slaves.

Seven Prosser buttons, dating to 1840 or later were recovered from Burial 1. Five were found around the skull, and two were found in the area of the sternum, suggesting this adolescent was wearing a button-down shirt or nightgown. The absence of buttons with Burials 2 and 21, suggests that they may have been buried where pull over shirts and other clothing that lacked buttons.

Family cemeteries became common during the seventeenth and eighteenth centuries as Americans began to expand westwards into areas of Kentucky, North Carolina, West Virginia and Virginia. A dispersed settlement pattern emerged during this time with most people living on isolated farms and plantations. The dispersed nature of agricultural settlements and the lack of churches or sanctified burial grounds during these first years on the frontier prompted the use of family burial plots. By the eighteenth century the use of such private burial grounds was common practice.

The Beautification of Death Movement

In the late eighteenth and early nineteenth centuries, American attitudes towards death changed radically from those of the early settlers. The Puritan views of the first Americans which saw death as a time of judgment, gave way to a more romantic view of death as part of God’s natural design. As a result of these more romantic attitudes, heaven became idealized, funerals became more elaborate and periods of mourning became longer. Items associated with death, such as grave markers and coffins, also became more elaborate, incorporating Christian symbols of beauty and peace. At this time coffins began to function not only as receptacles for the dead but also as the means for presenting the deceased. The oval viewing plate found with the coffin of William Towles Terrill Jr. and the weeping willow symbolism of Zerelda’s headstone can both be viewed as products of the beautification of death movement.