SUMMARY
The Twin Knobs rockshelter (15Cn50) and the Flat Top site (15Cn52) are associated with a prominent knob or sandstone hill in Crittenden County, Kentucky. During July and August of 2005, the Kentucky Archaeological Survey carried out excavations at both sites in advance of the proposed realignment of U.S. Highway 641 from Marion to Fredonia, Kentucky. This work was funded by the Kentucky Transportation Cabinet.

The rockshelter was used by Native Americans for several thousand years. It was initially used as a hunting camp by Late Paleoindian (8500-8000 B.C.) and early Archaic (8000-6000 B.C.) groups. About 3000 years later, Late Archaic groups returned to this locality. They continued to hunt wild animals, but also collected plants. The rockshelter continued to be used on a seasonal short-term basis throughout the Woodland and Mississippi periods.

The Flat Top site was only utilized as a camp during the Late Woodland (A.D. 500-1000) subperiod. 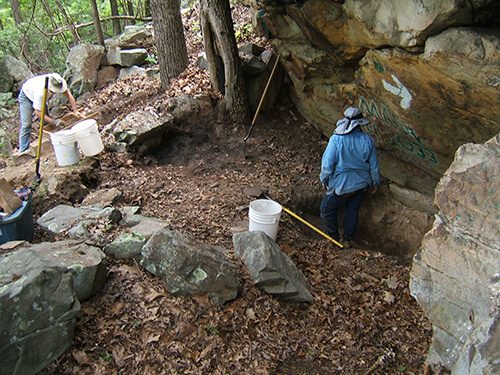 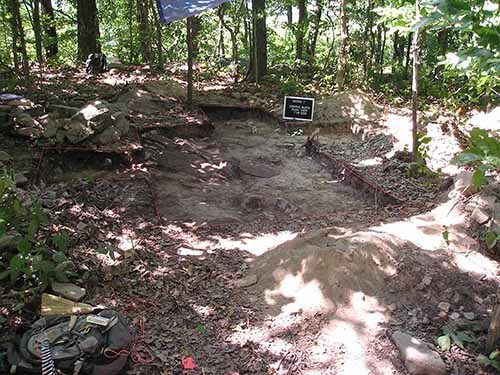 Sites
The Twin Knobs Rockshelter s located near Crayne, Kentucky. The rockshelter is part of a sandstone rock outcrop located on the southeast portion of the western knob of Twin Knobs. It faces in a southeasterly direction, encompassing approximately 48 meters square (517 square feet) at an elevation of 229 meters (751 feet) above mean sea level.

During KAS’s investigation of the Twin Knobs Rockshelter, areas within and outside the rockshelter’s dripline were examined. Cultural deposits within the rockshelter extended to a depth of one meter (3.3 feet) below the ground surface. Based on examination of the stratigraphic relationship of different soil zones, projectile point (spear points and arrowheads) types, and the presence or absence of pottery, KAS archaeologists were able to define five occupational zones.

The Flat Top Site is situated on top of a knob, just above the rockshelter. The site measures around 20 meters (66 feet) north-south by 35 meters (115 feet) east-west. The top of the knob, which is relatively flat, was covered in second and third-growth forest. The ground surface is strewn with large, outcropping sandstone boulders and smaller fragments of weathered sandstone. Within this area KAS archaeologists excavated 32 units.

Planview of excavation of Twin Knobs Rock Shelter. Each square represents a test unit. A record was kept of where materials were found in each unit. 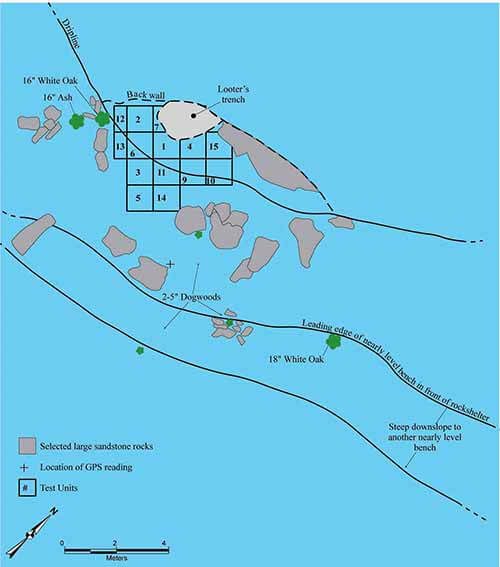 Profile of Flat Top site Cross-Section of the knob where the Flat Top Site was found. 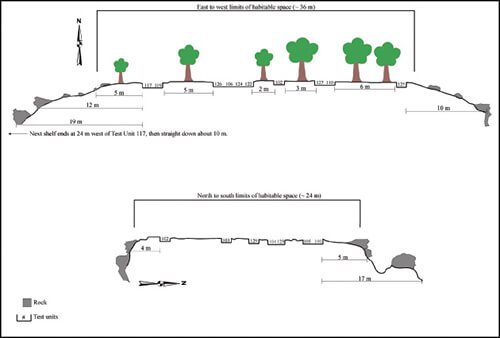 
Stylistic differences in the projectile points found within different occupation zones were used to determine when and for how long the Twin Knobs site was occupied. From the deepest deposits archaeologists recovered projectile points (spear points) associated with the Late Paleo-Indian occupation (the bottom 2 points). The specimen on the bottom left was probably broken during the manufacturing process. These points are characterized by a concave base, medium to large size, and lanceolate shape.

The Early Archaic spear points are the next 4 points up from the bottom two. They are characterized by large to medium size, triangular shape, corner notched, barbed shoulder, straight to flare shoulder edge, and an expanding stem.

Above the Early Archaic materials, are two Late Archaic spear points. They are characterized by small to large size, triangular shape, straight to barbed corners with straight edges, and a convex base.

Next up is a spear point dating to the Early Woodland. It is characterized by medium-size with distinctive contracting stems, lanceolate to triangular shape with straight, sloped, or barbed corners. Stems are rounded to nearly pointed.

To the right of this point is a Late Woodland spear point. Similar projectile points were recovered from the Flat Top site. They are characterized by a small to medium size, triangular shape, straight corners with straight edges, expanding stem, and a straight base.

Pottery found in association with the Late Woodland points is similar to that found at the Flat Top site. Most of the sherds are very thin walled vessels tempered with fragments of fired clay. Their exterior surfaces had been impressed with S-twist (the direction the cord is woven in) cordage. Relatively wide, shallow notches extend diagonally across the entire lip of the rims.

The final occupation of the rockshelter is marked by an arrowhead point in the upper left side of the figure. These types of points are characterized by medium size, triangular shape, no stem, and a straight base.

All of the projectile points had been manufactured from local cherts, and most had been resharpened several times. 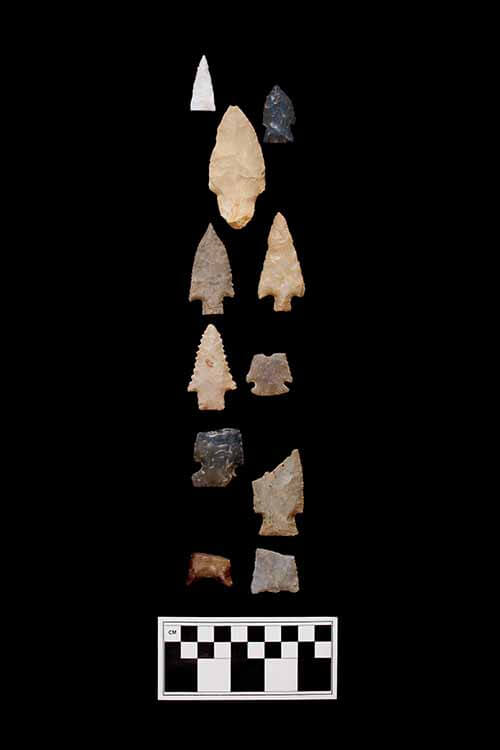 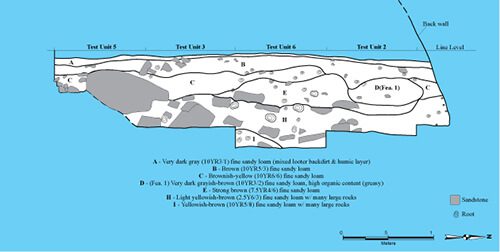 Zone H and I, the deepest deposits in the rockshelter, held spear points that were associated with Late Paleoindian and Early Archaic people. During visits to the site they would have made and reworked their spear points and other tools. All were manufactured from local stone resources. Since no animal or plant remains were recovered from these zones, archaeologists could not determine the types of animals they hunted or the plants they collected.

The rockshelter does not appear to have been used during Middle Archaic times (6,000 to 4,000 B.C.) Paleoioindian.

Zone E contained a Late Archaic activity area. This intensely burned area contained a large amount of ash and charcoal that most likely represented the remains of surface fireplaces. The recovery of a pitted stone and two grinding slabs from the surface of this burned area suggests that during an extended visit to Twin Knobs, Late Archaic inhabitants processed a variety of nuts; mostly hickory, but also black walnut, hazelnut, butternut, and acorn. After they processed the nuts, they would have eaten some, and stored the rest for later use. The absence of animal bones from this zone, suggests that plant processing was the primary activity undertaken at the site at this time. Other plants that they collected include sweetclover, persimmon, ragweed, spikenard, and sumac. The presence of the hammerstone, suggests that as they processed and consumed the nuts and other plants they also refurbished their chipped stone tools.

Zone D corresponds to an Early Woodland pit feature. As with the Late Archaic campers, the Early Woodland visitors to the rockshelter ate a variety of nuts. While at the rockshelter they collected a variety of wild plants, such as pondweed, pokeweed, spikenard, sumac, nightshade, blackberry, grape, and cherry. These plants would have been collected from a variety of different habitats located near the shelter, namely from dryland, wetland, and wooded settings. During their stay at the rockshelter they would have harvested goosefoot and sunflower, which they had planted in the spring in nearby gardens. They also hunted and ate white-tailed deer, rabbit, opossum, groundhog, and turtle. The low frequency of animal bones, suggests that, for the most part, inhabitants at the shelter tossed left-over animal remains out of the shelter.

Zone C consisted of Late Woodland projectile points and pottery. As with Late Archaic and Early Woodland visitors to the site, the Late Woodland occupants of Twin Knobs collected and ate a variety of nuts. They also would have collected and ate similar wild plants, such as pondweed, pokeweed, spikerush, sumac, grape, blackberry, and cherry. In addition to goosefoot and sunflower, they also grew marshelder in nearby gardens.

Zone A and Zone B are associated with the last prehistoric group to occupy Twin Knobs Rockshelter. The Mississippian occupation of Twin Knobs is represented by 13 triangular projectile points. It appears to have consisted of brief visits by hunting parties, perhaps in transit from one village to another. During their short visits, they would have manufactured and resharpened their triangular arrow points and other chipped stone tools.

During the Late Woodland visit to the rockshelter, Late Woodland groups also camped on top of Twin Knobs. Among the artifacts recovered from this camp were 34 polished hoe flakes. The highest concentration of cultural material was recovered from a block of test units placed in the west-central portion of the site. In fact, all of the hoe flakes were recovered from this particular block. People at the Flat Top made stone hoes at this location on the hill top. They would have used these hoes to tend nearby gardens.

The Flat Top Site would have afforded Late Woodland groups an accommodating view of the surrounding countryside and possibly a strategic defensive location.

During the Late Paleoindian (8500-8000 BC) and Early Archaic (8000-6000 BC) subperiods, the Twin Knobs Rockshelter was used as a hunting camp where stone tools were repaired and animals were butchered. By the Late Archaic (3000-1000 BC) and Early Woodland (1000-200 BC) people had begun to stay at this shelter for longer periods of time. Though they still manufactured stone tools from locally available materials and hunted, they also collected and processed wild plants. By Early Woodland times they may have planted small gardens near the shelter.

Although plant collection and consumption continued during Late Woodland occupation of the rockshelter appears to have been for shorter periods of time than during the Early Woodland. Late Woodland people, however, were the only ones to occupy the Flat Top site. The recovery of polished hoe flakes indicates that they resharpened the chert hoes that they used to cultivate nearby fields.

Mississippian use of the rockshelter may represent a return to its use primarily as s hunting camp. The large number of triangular projectile points coupled with the absence of Mississippian pottery, suggests the shelter was primarily used by men on a short-term basis.

When observed by indigenous peoples, Twin Knobs would have stood out on the landscape, much as it does today. The sandstone overhang located at Twin Knobs, would have provided small groups some shelter from the elements, while the top of the knob would have afforded them a commanding view of the surrounding countryside. For Late Woodland groups it also may have been a defensive location.